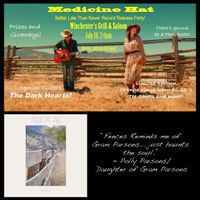 "Fences reminds me of Gram Parson... just haunts the soul..." ~ Polly Parsons/Daughter of the late Gram Parsons It's finally happening... the long awaited record release party for Fences! Originally slated to be released March of 2020 while in Austin, performing during SXSW, Medicine Hat is finally having a record release party! To celebrate the release, they pressed a limited edition version of the record on translucent orange vinyl. These will be available along with CDs and other new band merchandise at the event! They've also brought together a group of musicians to perform their songs with them. So yeah... they're plugging in and getting electric! Starting the afternoon off will be their friends, The Dark Hearts. You won't want to miss this afternoon of live and original music!